School News from the Superintendent’s Office

Every Student, Every Day: Improving school attendance is vital to student success

Nationally, nearly 8 million students miss almost a month of school in excused and unexcused absences every year according to Data Matters.

Each September, schools, city agencies, and others in the United States join a nationwide effort to raise awareness about the value of regular school attendance and focus on reducing chronic absenteeism in the new school year.

In the Laguna Beach Unified School District (LBUSD), Goal 1 of the Local Control and Accountability Plan is to “increase student academic achievement and social and emotional strength through collaboration, critical thinking, creativity, and communication.” A key metric in measuring progress towards this goal is chronic absenteeism, due to the significant impact school attendance has on student learning outcomes.

Chronic absenteeism is described as missing 10 percent of the school year -- or about 18 days -- for any reason, excused or unexcused. Research indicates that this is the point at which absenteeism begins to affect student performance.

In 2016-17, California identified chronic absenteeism as a metric in the state’s accountability system and provided schools and districts with the data to help guide improvement efforts. This initial data identified that the LBUSD chronic absenteeism rate was higher than the state and county average, which prompted a systematic look at existing attendance processes and procedures districtwide to identify areas that needed more focused efforts. To help support the implementation of our new processes and procedures, in 2017-18 the LBUSD Board of Education approved the addition of a second high school attendance specialist.

A year ago LBUSD’s rate dropped below the statewide average and will likely fall below the county average when that data is released later this fall. The chronic absenteeism rates for LBUSD schools and district are listed in Figure 1 below, including the year-to-year changes. 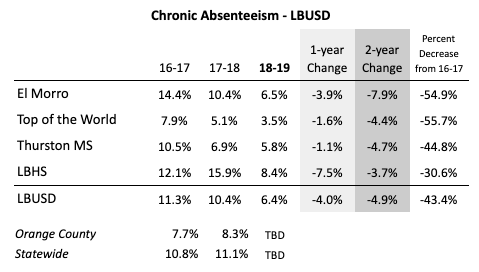 Improving school attendance is not a solo effort. While attendance improvements may begin in a single classroom, school, or district, the most effective and sustainable approaches are data-driven and supported by coordinated prevention and intervention.  These key ingredients of change have been instrumental in the success of students and schools in Laguna Beach and the surrounding areas we serve. In 2019-2020, LBUSD will continue to focus on solidifying meaningful relationships critical to the success of our students.

Note: Dr. Chad Mabery, director of assessment and accountability, contributed to this report.